Yes, I made a mistake. I have unfairly praised and promoted the IR Chrome filter in the past. Kolari Vision’s filter, designed by a French IR fan named Yann Philippe, is meant to mimic the Aerochrome style. And yes, if one is satisfied with red-orange trees, it is quite sufficient. But Aerochrome is more, much more.

And so it is a bit presumptuous to advertise the IR Chrome filter as Aerochrome for the digital age, as Kolari does. And moreover to sell it at exorbitant prices. Especially since it can be built relatively cheaply by yourself.

Today, I don’t use the IR Chrome at all – it sits in a box gathering dust.

Why the IR Chrome filter actually has nothing to do with Aerochrome:

– Trees/vegetation are not red, they’re orange-reddish. You can make them red in post-processing, but I can do that with other filters.
– The colors are too uniform. Typical Aerochrome colors like pink or a rich deep red are missing.
– The sky is too bright, even with polarizing filter.
– The color changes typical for Aerochrome (for example car taillights) are missing.
– The look seems kind of dirty, it’s hard to describe. Those studio-like light and shadow effects typical for Aerochrome are missing.

The reason is simple. Unlike Aerochrome, IR Chrome lets through large amounts of the blue spectrum and only a small amount of infrared. The infrared is blocked somewhere between 700nm and 750nm. Actually it is a blue filter and a bad hot mirror filter in one.

Aerochrome, on the other hand, works by blocking out blue. In RGB composition, this means that blue contains only IR. The blue channel is shifted to the red channel. Red becomes green and green becomes blue. This is the only way to get the typical color changes, the typical red tones and the typical illumination.

This color/light distribution is valid for the analog original as well as for the digital version, which can be done in several ways. I find the use of green and orange filters the best. I have written many articles about this. For example here.

So how can IR Chrome be imitated? Relatively simple.

Buy a Swatchbook from Lee Filters and pick out number 115, Peacock Blue. You also need an “inefficient” hot mirror – ideally this Chinese one. 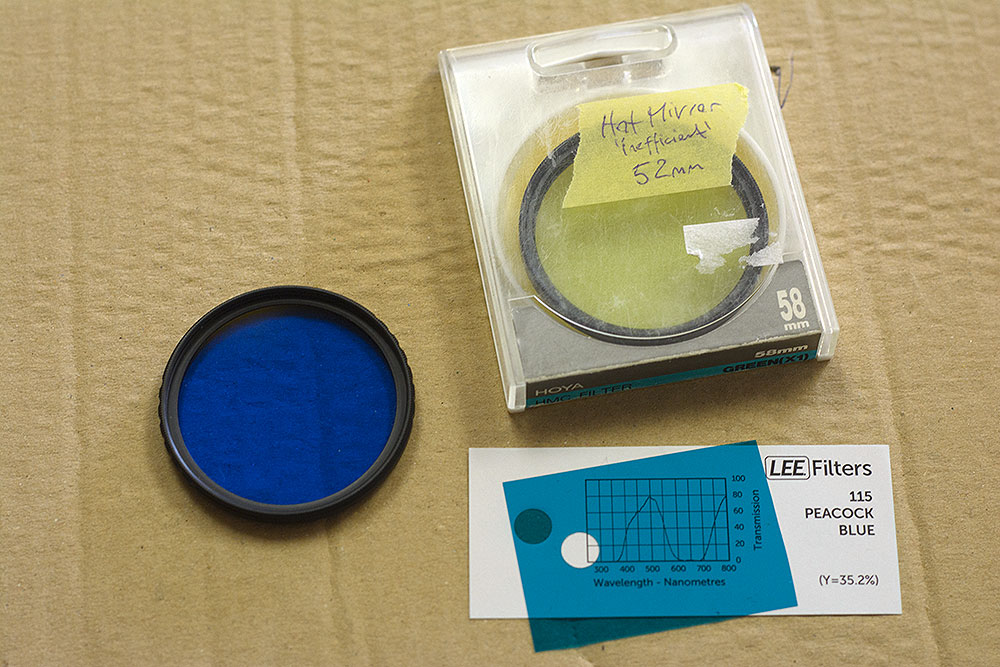 Combine them (you can cut the Lee filter and stick it behind the lens) and you get the following look. Straight out of the camera it looks even a bit better than IR Chrome in my eyes. Above always IR Chrome, below Peacock Blue plus Hot Mirror. Only White Balance on asphalt and “Landscape” preset. Almost the same, right? 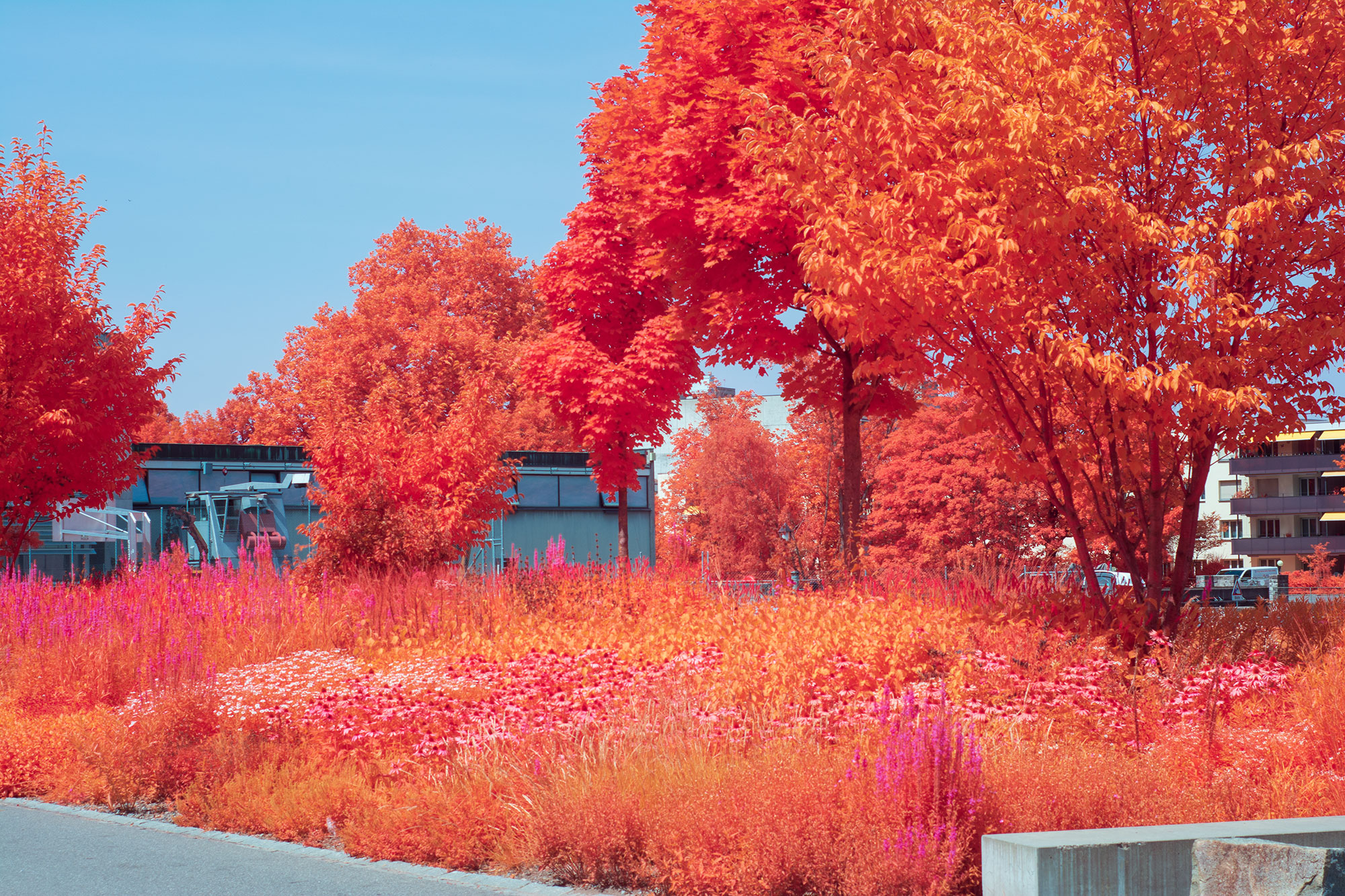 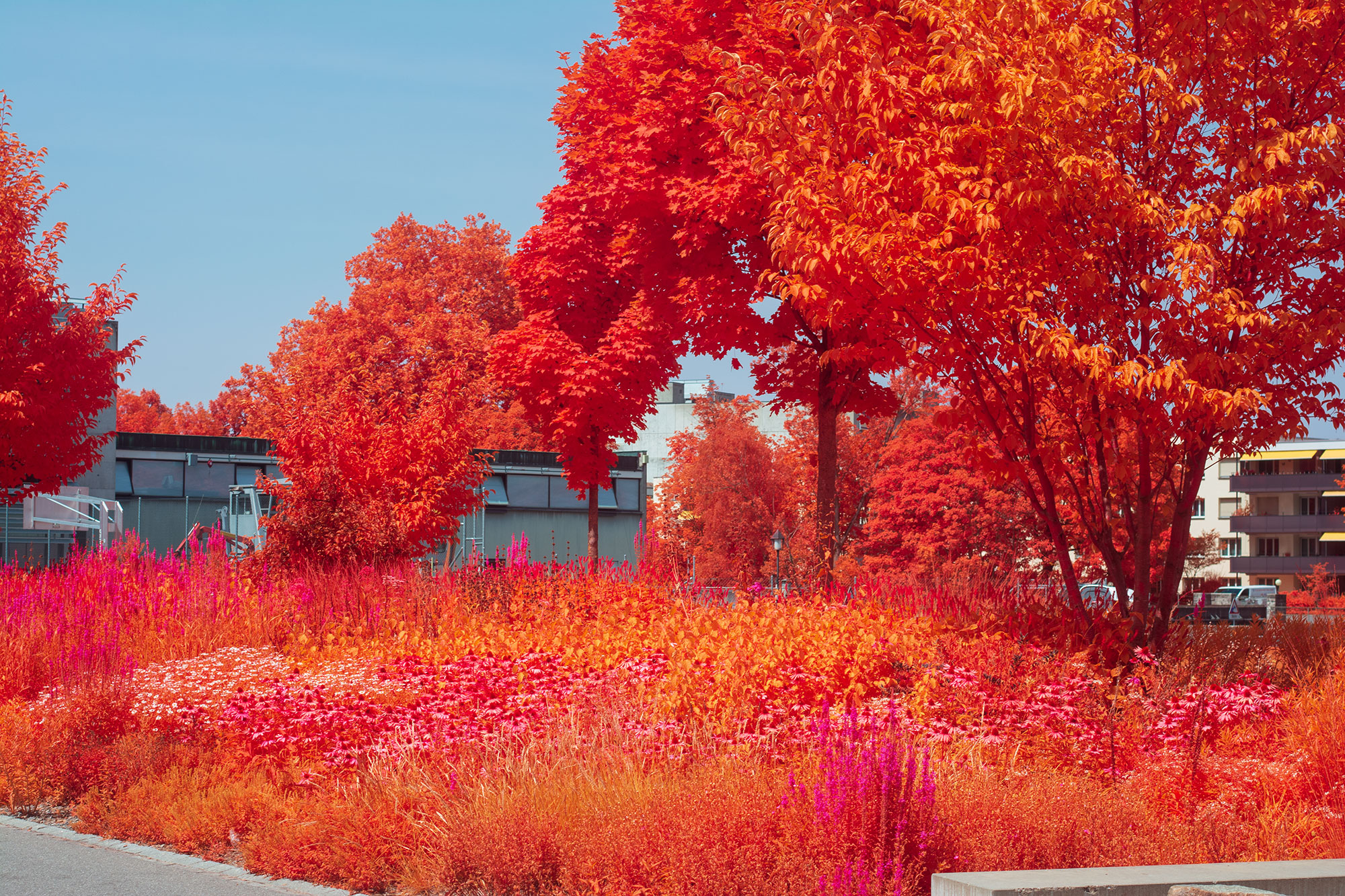 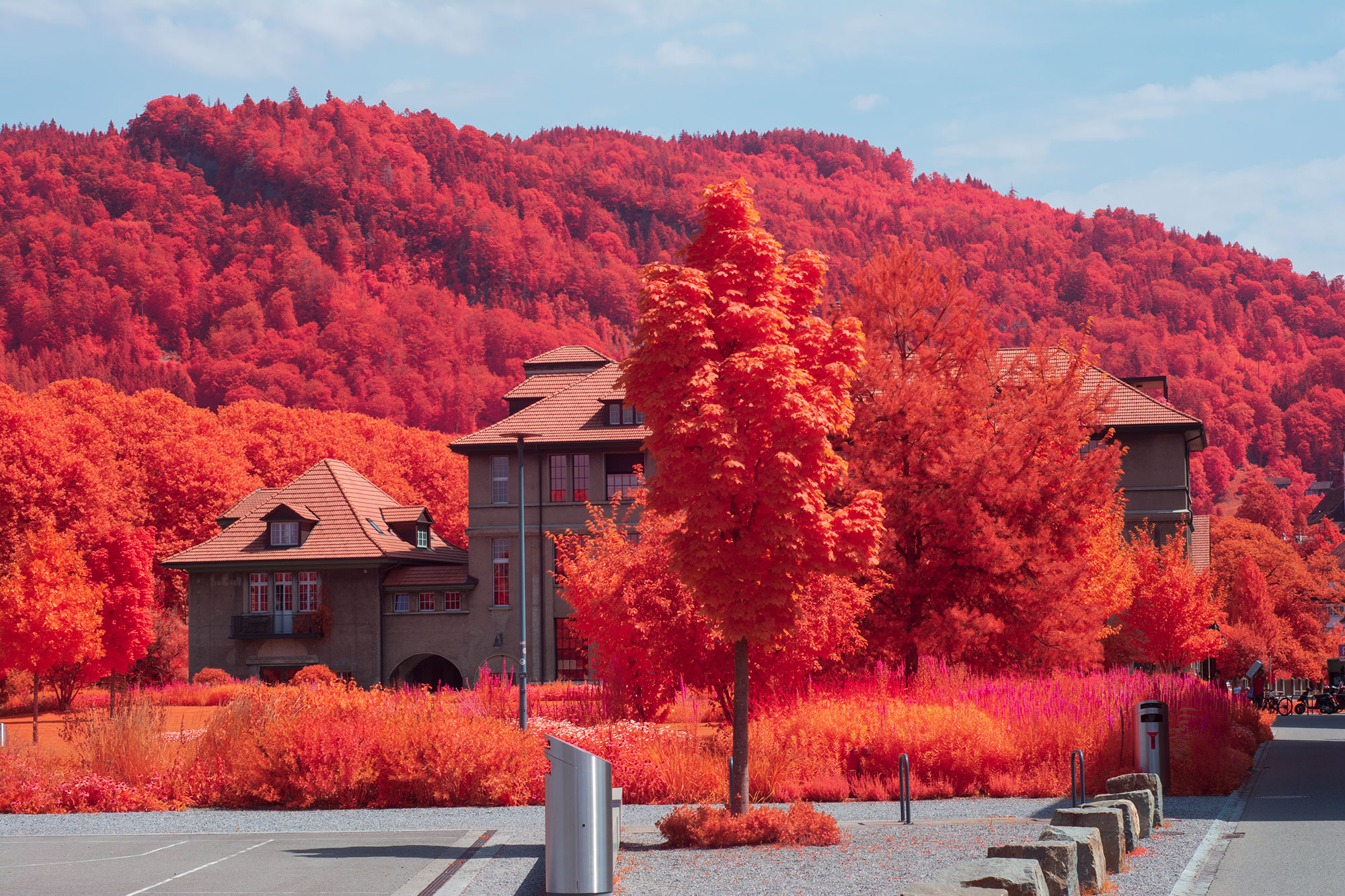 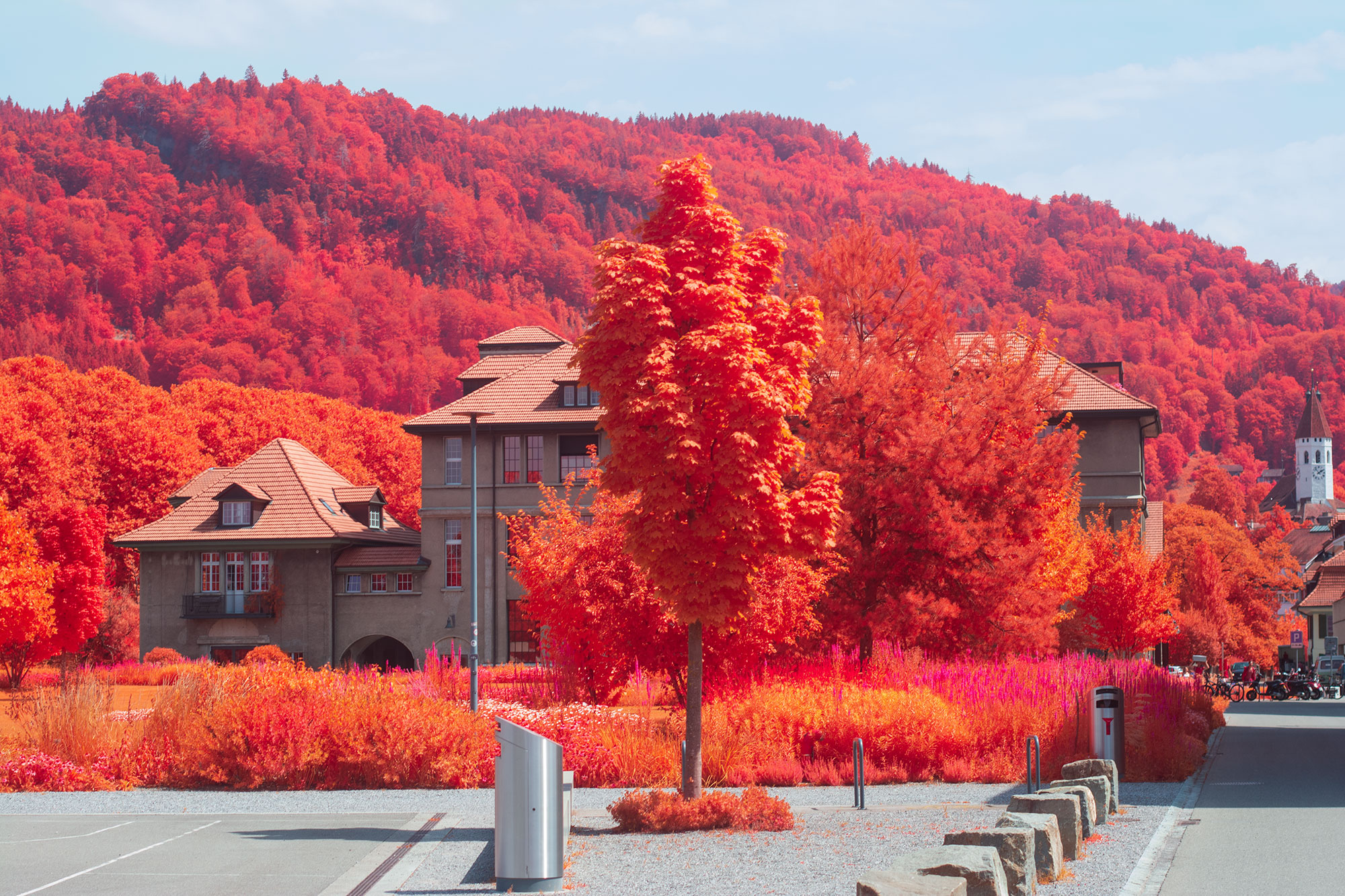 I’m not a fan of devaluing the work of others. And that’s not what this post is intended to be. It’s simply to demonstrate that IR Chrome has little to do with Aerochrome and is easy to create yourself.

However, the numerous photos on the web made with this filter show that the IR Chrome filter is relatively popular and pleases many people, even those who had nothing to do with infrared photography before. And getting more people interested in IR photography – no matter how – is certainly a good thing.